The Lady Most Willing…

Book 2 in the Ladies Most series

You are cordially invited to a kidnapping…

Taran Ferguson, laird of his clan, is determined that his ancient (if not so honorable) birthright be secured before he dies. When both his nephews refuse to wed, he takes matters into his own hands, raiding an English lord’s Christmas ball and making off with four lovely potential brides (and one very irate duke). When his nephews, the Comte de Rocheforte and the Earl of Oakley, arrive for their annual holiday visit, they are drawn into a matchmaking party, of sorts. Among the unwitting guests are:

• Miss Fiona Chisholm, a beauty with a scandalous past.
• Lady Cecily Tarleton, a lovely heiress—but she’s English.
• Miss Catriona Burns, a lady with no name or fortune, so clearly someone made a mistake!

As the snow piles up outside the highland castle, and the guests are forced to pass the time together, the initial dismay turns to unanticipated attractions and then irresistible passions — and indeed, there might be one LADY MOST WILLING to marry a Scottish lord.

A novel in three parts, as fresh and charming as the Highland air, written by three of the very best writers of historical romance. 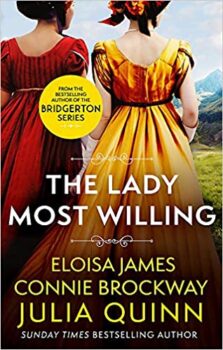 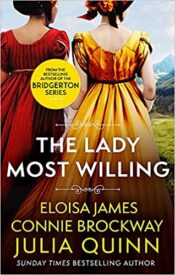 The only person in the library was Miss Fiona Chisholm. She lay on a sofa before the fire, reading a book, dark red curls tumbling down one shoulder. Her spectacles were surprisingly winsome, Byron thought. Really, it was enough to make one think that they might become fashionable.

As he walked over to the fireplace, she looked up from her book, and her brow creased for a moment. He could tell perfectly well that she had momentarily forgotten who he was. This was a woman truly unimpressed by his consequence.

“Lord Oakley,” he prompted, adding, “but please call me Byron; we are all on terms of the greatest familiarity at Finovair.” It wasn’t at all hard to ask her that. In fact, he would rather like to hear his name on her lips.

Fiona had actually been laughing to herself when the click of a boot heel on the stone floor made her look up from her book. For some moments the pompous Sir Walter of the novel and the pompous earl in front of her were confused in her mind; she blinked at Byron as if he had somehow materialized out of the book’s pages.

Then he repeated his name, and Fiona realized with a start that Sir Walter had not sprung to haughty life. And what’s more, her comparison wasn’t fair in the least. For one thing, Oakley was relatively young and remarkably good-looking, with white-blond hair clipped very short, and winged black eyebrows. He reminded her of a medieval saint carved from ivory: all dignity, virtue, and pale skin.

Not a man who could conceivably feel other than disgust for her.

She swung down her legs with a smothered sigh, rose, and dropped a respectful curtsy. “Lord Oakley,” she said, warbling the title the way brainless young women did around such an eligible catch.

Byron bowed to the young lady, and then walked over to stand just in front the sofa. He almost sat without being invited to do so, because that was the way people on easy terms acted. Or at least, so he thought. But his breeding got the better of him and he remained on his feet. “We all agreed to address each other by our Christian names,” he informed her, hating the hectoring tone of his voice even as he spoke. “Mine is Byron.”

She regarded him silently for a moment. Her eyes were just as green as they had appeared last night, and her spectacles perched on a delightfully pert nose.

“In fact, you and my sister made that agreement between you, though I must presume that the Duke of Bretton and Catriona have agreed to the same informality. Does all this lack of ceremony distress you?” she asked, avoiding use of his name, he noticed. And not offering to allow him to use her own.

“I am not accustomed to it,” he admitted. “Do I remember that your name is Fiona?”

“Yes,” she confirmed, again not granting him permission to address her as such.

Despite himself, he felt a little stung. “I apologize for interrupting your reading,” he said, making up his mind not to leave the room directly, because it was good for him, one might say instructive, to remain with people who took no account of his importance. Fiona certainly fell into that category. “May I ask what volume has caught your interest?”

The earl was dangerously beautiful, Fiona thought. But so controlled. Did he even perspire when he made love? Did his face turn red, did he make inelegant noises, did he…

“I am reading a novel called Persuasion,” she said, jerking her mind from that disgraceful (though interesting) subject. As it happened, she had not personally acquired information on the subject, but she had heard all about it. Nothing she had heard about grunting, sweaty encounters sounded terribly appealing.

“You have found your way into the wrong room, Lord Oakley,” she said, tucking herself back into a corner of the sofa. “Is there something I might help you find in the library?”

Instead, he sat down beside her.

Fiona took a deep breath, and then wished she hadn’t. He even smelled good, like starched linen and manly soap. She didn’t like English earls. In fact, she didn’t like Englishmen in general. This one was distracting her from her book. He made her…he made her think about things she had given up.

She had once agreed to marry, and that was enough. Though, of course, her betrothed had been nothing like Oakley. Dugald had been an oaf—and a violent, drunken one at that. The earl didn’t look as though he ever relaxed enough to drink spirits.

“Lord Oakley,” she said, rather less than patiently, “would it bother you greatly if I continued to read my book?”

“May I ask you a blunt question before you recommence, Miss Chisholm?”

“If you must,” she replied. “But only if you give me the same courtesy. What on earth are you doing here? You should be in the drawing room being wooed by adoring young ladies.”

“I hope you are not wounded by Catriona’s defection to the duke. Either my sister or Lady Cecily would be a splendid countess, and I’m certain they are waiting with bated breath for your return to the drawing room.” A less severe man might have been thought to smile, she noticed. He did smile with his eyes, if not with his lips.

“I gather that you deem Catriona and yourself as birds of a feather.”

“You wouldn’t want me to adore you,” Fiona assured him. “I have a ruined reputation. That being the case, I think we could simply skip the part where I try to entice you into an unwise marriage based on our unexpected propinquity, don’t you?”

“That was a very long sentence.” Yes, he was smiling. Amazing.

“I can translate it, if you’d like,” she offered.

The Lady Most Willing… is available in the following formats:

The Lady Most Willing… is Book 2 in the Ladies Most series.

Book 1: The Lady Most Likely…

Book 2: The Lady Most Willing…

Book Collection: The Ladies Most…