How to Be a Wallflower

Book 1 in the Would-Be Wallflowers series

From New York Times bestseller Eloisa James, a new Regency-set novel in which a heiress with the goal of being a wallflower engages a rugged American in a scorchingly sensual, witty wager that tests whether clothing does indeed make the man—or the wallflower!

Miss Cleopatra Lewis is about to be launched in society by her aristocratic grandfather. But since she has no intention of marrying, she visits a costume emporium specifically to order unflattering dresses guaranteed to put off any prospective suitors.

Powerful and charismatic Jacob Astor Addison is in London, acquiring businesses to add to his theatrical holdings in America—as well as buying an opal for a young lady back in Boston. He’s furious when a she-devil masquerading as an English lady steals Quimby’s Costume Emporium from under his nose.

Jake strikes a devil’s bargain, offering to design her “wallflower wardrobe” and giving Cleo the chance to design his. Cleo can’t resist the fun of clothing the rough-hewn American in feathers and flowers. And somehow in the middle of their lively competition, Jake becomes her closest friend.

It isn’t until Cleo becomes the toast of all society that Jake realizes she’s stolen his fiercely guarded heart. But unlike the noblemen at her feet, he doesn’t belong in her refined and cultured world.

Caught between the demands of honor and desire, Jake would give up everything to be with the woman he loves—if she’ll have him!

Note from Eloisa: A must-read prequel: The heroine of My American Duchess appears in How to be a Wallflower—with her kids! 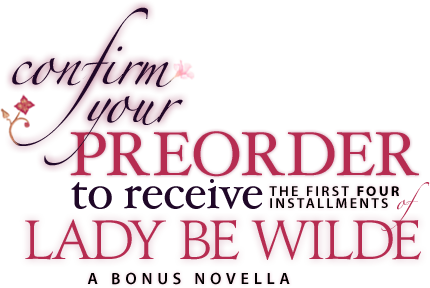 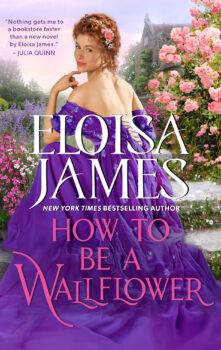 See all preordering options, including audio and more
↓

The romance galaxy is filled with luminous stars, but few twinkle as brightly as James who once again dazzles readers with superbly conceived characters, a sublimely sensual love story, and sparkling wit. 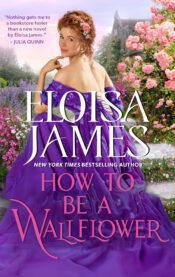 The American didn’t just enter the chamber: he burst into it. It wasn’t a matter of speed. He simply had the sort of character that dominated a room.

Partly because he was big. Big and rough. She’d never given America much thought, but she could imagine this man making his way through untamed forests in the snow.

Yet here he was in London, his hair looking as if it’d been in a high wind. It hardly needed to be said that his hair wasn’t brushed forward in the currently fashionable style; unruly curls tumbled over his head like one of those Italian statues they had in the British Museum.

His features were harsh, his jaw remarkably strong, and his nose too. He certainly wasn’t a gentleman, unless this was what all American gentlemen looked like. It was rather fascinating, like seeing a disheveled lion padding its way down Oxford Street.

She was staring at the fellow, which was fantastically rude and quite unlike her. “Good afternoon,” Cleo said, walking toward him.

His gaze brushed over her and landed on Martha.

“Mrs. Wells,” he said, striding toward the costumier and ignoring Cleo entirely, “I am told by your solicitor that you declined to sign the contract earlier this morning.”

That didn’t happen to her.

She wasn’t vain, but she was a wealthy young woman whose mother had painstakingly taught her how to catch a man’s attention. Julia, after all, had considered a day wasted in which she didn’t attract male notice. Obviously, clothing could make a woman into a wallflower.

Or invisible, however you wanted to put it.

Her mother begged to differ, but Cleo wasn’t in the mood to entertain impertinent comments from deceased relatives.

Slowly she wheeled about to watch as the American started talking to Martha about his offer. A spark of amusement curled her lips. He thought she was not worth a greeting, did he? Yet given that handshake agreement with Martha, he stood in her emporium.

With that, her smile turned into a grin. Lately, life hadn’t seemed very interesting. Life with her mother had been full of adventure, exhausting adventure.

But besting this man, with his lack of manners and dismissive behavior?

It would be a pure pleasure.

How to Be a Wallflower is available for preorder in the following formats:

How to Be a Wallflower is Book 1 in the Would-Be Wallflowers series.

Book 1: How to Be a Wallflower