Book 2 in the Would-Be Wallflowers series

New York Times bestselling author Eloisa James returns to the Would-Be Wallflowers series with a sparkling romance between a proper earl and the lady who is entirely inappropriate for him—who he can’t stop thinking about.

Giles Renwick, Earl of Lilford, has never made a fool of himself over a woman—until he meets Lady Yasmin Régnier. Yasmin is ineligible for his attentions in every way: not as a wife, certainly not as a mistress (she is a lady!), nor even as a friend, since they vehemently dislike each other. Her gowns are too low, and her skirts are dampened to cling to admittedly lovely thighs. She loves to gossip—and giggle.

She isn’t dignified, or polite, or even truly British, given that her father’s French ancestry clearly predominated. Not to mention the fact that her mother had been one of Napoleon’s mistresses, a fact she makes no effort to hide.

And what will he do if she says yes? 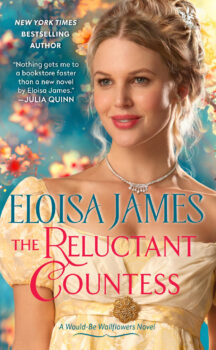 See all preordering options, including international, audio, and more
↓ 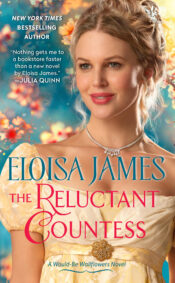 For over a decade, Giles Renwick, Earl of Lilford, had watched with distaste as acquaintances succumbed to lustful impulses that cast their lives into chaos, if not catastrophe. At the age of thirty-two, he prided himself on a private life as controlled as his estate. He had never made a fool of himself over a woman.

Lady Yasmin Régnier was ineligible for his attentions in every way: not as a wife, nor yet a mistress (she was a lady!), nor even as a friend, since they vehemently disliked each other.

Yet here he was, blood pounding as he waited for the first waltz, which she had had promised to him. Meanwhile the lady was romping through a country dance with Edwin Turing.

All of polite society knew she’d turned down Turing’s marriage proposal, along with those of at least eight others. Wasn’t it Shakespeare’s Juliet who described Romeo as a bird with a string around his leg?

Other ladies dispatched rejected suitors to woo other women. Lady Yasmin blithely kept her wooers on a string, thirsty for a smile or a waltz. It was profoundly irritating to count himself among them—and scant relief that no one in London realized that he was so…enchanted?

No matter his obsession, Giles could never ask her to be his countess. Lady Yasmin’s gowns were cut too low, and her skirts were dampened to cling to admittedly lovely thighs. She loved to gossip—and giggle. She smiled and flirted with everyone from new babies to elderly men with a foot in the grave. She carried a small flask of brandy to balls, claiming to hate lemonade.

She wasn’t dignified, or polite, or even truly British, given that French upbringing. Not to mention the fact that her mother had been one of Napoleon’s mistresses, a fact Yasmin made no effort to hide.

One of her silliest suitors had written a poem claiming her hair was the color of cowslips and her eyes as violet as twilight. To Giles’s mind, her beauty didn’t matter, though he appreciated her low bodices as much as the next man. What caught him was her laugh, the way she shared joy so freely.

Yet asking her to be his wife was unthinkable.

He allowed himself to dance with her once an evening, always the first waltz. Thereafter, he courted proper, eligible ladies, forcing himself to avoid Lady Yasmin. Telling himself that he was searching for an appropriate countess, as demanded by custom and tradition.

When the first waltz was finally announced, Giles made his way to her side, bowing and kissing her gloved hand. His whole body relaxed as his arm closed around her and they moved into the dance.

With a start, he realized that she had burst into speech.

Then again, when wasn’t she chattering?

“Your sister is dancing with Lord Pepper,” Lady Yasmin told him with an expectant glance.

“It wouldn’t be a terrible match on paper, but you mustn’t ignore his penchant for the racetrack. He must find a wife with a large dowry.”

If there was one thing Giles loathed, it was gossip. Tittle-tattle of this sort had shattered his family. Led to his father’s death, though Lady Yasmin would be unaware of that as she grew up in France.

He was the very last person to rebuff anyone on the basis of idle chatter.

“You’re giving me that hateful look again,” she observed. “I thought perhaps you reserved it for me, but I saw you glowering at Fitz earlier.”

Fitz—or Lord Fitzgibbon-Foley—was an irritating beetle of a man. The fact that the betting books had identified Fitz as an excellent candidate to win Lady Yasmin’s hand in marriage had no bearing on his opinion.

“I prefer to judge a man on his merits, rather than idle gossip,” he said. “I think a great deal of Lord Pepper.” Not that he knew more of the younger man than vague memories from Eton. Pepper hadn’t taken up his seat in the House of Lords, which meant that Giles paid him no attention.

“You are responsible for your sister’s welfare,” Lady Yasmin retorted, as she floated through the dance. “You have chosen to escort her to events yourself, rather than place her in the hands of a reliable chaperone, which means that you must pay attention to such details.”

It was entirely predictable to find irritation seeping into his veins; it happened whenever they engaged in conversation.

“What gentleman doesn’t go to Cheltenham and Ascot?” Giles inquired, raising an eyebrow. “No one would question Pepper’s place in the society.”

Lady Yasmin’s brows were perfect arches even when she scowled. Giles had a mad impulse to trace them with a finger. A finger that would drop down to touch the sweet flush on her cheek and then caress her lips.

Presumably those lips were inherited from her French father, because no Englishwoman had lips that plush, let alone tipped up into a near-constant smile.

She wasn’t smiling now. “Are you referring to those who question my place in fashionable circles?”

“True, my mother’s position as one of the emperor’s dearest friends precludes her rejoining English society, had she longed for such delight.” Yasmin’s ironic tone made her mother’s feelings clear. “But my grandfather, the Duke of Portbellow, assures me near daily that the English do not visit the sins of parents upon their children. My mother gave me one of Napoleon’s hats, and my grandfather perched it on a skeleton he keeps in the drawing room. He considers the family connection, as it were, a jest.”

“You are indubitably a lady,” Giles stated. “I meant that blather about the racetrack is no reason to discount a suitor for my sister’s hand before the man has even proposed.”

She wasn’t attending. “I’m not sure I had that right. ‘Were she my sister?’ That’s right, isn’t it? Because Lady Lydia couldn’t possibly be my sister. ‘I would, was she my sister’? No, that definitely doesn’t work.”

“Your English is improving,” Giles said. Instantly he felt like a condescending ass, because her command of the language was excellent.

Lady Yasmin didn’t take offense. “I wish you’d tell my grandfather as much. His Grace corrected me twice at breakfast this morning.” She rolled her eyes. “If only he could hear me now, using the subjunctive like an Oxford don.”

They were nearing the bottom of the ballroom, so Giles drew her closer and began turning in circles. Lady Yasmin kept talking, effortlessly following his lead. “My point is that it’s natural for your sister to refuse a chaperone.”

Her mouth tightened. “I suppose you think I’m getting too high for my nut, Lord Lilford. But I know young women.”

“I’m not sure what you mean by a reference to your nut.” Giles took a deep breath, fighting off the fact that his cock responded to her scent as if… He wasn’t any good at metaphors. Perhaps all the blood in his body had drained from his head.

Lady Yasmin gave him an impish smile, and he instinctively drew her closer once again. “American slang,” she told him. “Getting too high for your nut means that you are overreaching.”

Giles cleared his throat. “The phrase applies only to male over-reachers.”

“His nut,” Lady Yasmin said, “Like a—” She broke off, her brows drawing together again. “Not a reference to a squirrel hiding his treasure in a tree?”

“No,” Giles said. “I believe we’re talking about male anatomy.” Not that he had ever discussed male anatomy with a young lady before.

“Bollocks!” she said, with an enchanting giggle.

Giles swallowed hard. The woman he was holding in his arms was a lady. Her mother’s situation didn’t mean…though Lady Yasmin clearly wasn’t chaste in the strictest sense…his thoughts fogged with a bout of pure lust.

“I find the differences between English and American usage fascinating,” Yasmin said. “But I keep tripping over naughty words. English is littered with them, far more so than French.”

“Americans and British are fond of bawdy puns,” Giles agreed. The smile on her mouth made him want to bite her. Kiss her. Both. The only explanation was that he was losing his mind. It happened to men in middle-age, though at thirty-two he hardly considered himself there yet.

“To return to the matter at hand, the fact that your sister doesn’t want a chaperone is proof that she needs one.”

“Of course she did,” Lady Yasmin murmured, rolling her eyes. “I expect your sister was a parlor boarder?”

“She was,” Giles confirmed.

“After charging you a king’s ransom, Mrs. Bretton could scarcely tell you the truth, could she? Moreover, she hopes you will place your daughters in her care, in time.”

He felt his frown turn to a scowl. “What ‘truth’ are you referring to? More gossip?”

“God forbid. You’ve made your opinion clear,” Lady Yasmin said, glancing at the orchestra. “This waltz must be almost over.”

Giles had bribed the orchestra director to play the longest waltz in their repertoire, so he ignored that observation, spinning in a few more circles so their thighs brushed together. He was cursed with a sensitive nose that sent him urgent messages about who had bathed before the ball, and who did not. Even among the washed, there were those whose perfume burned his nose, billowing like an invisible cloud around their bodies.

In contrast, her scent clung to her skin, only perceptible during a waltz. In a perfect world, he would back her against a wall, and kiss her until she …

He cleared his throat. “You believe that my sister is ill-behaved?”

Even to his own ears, his voice sounded unfriendly.

“I am not saying Lady Lydia is wanton. She’s scarcely out of the schoolroom. I’m simply telling you that her entire mind is focused on young men. For example, where is she now?”

The Reluctant Countess is available for preorder in the following formats:

The Reluctant Countess is Book 2 in the Would-Be Wallflowers series.

Book 1: How to Be a Wallflower

Book 3: Not That Duke