Say No to the Duke Cover Reveal and Chapter One Excerpt! 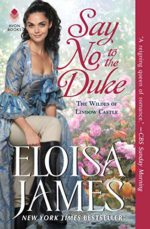 Say YES to Eloisa’s next book, Say No to the Duke, book 4 in the Wildes of Lindow Castle series. Betsy’s story is coming June 25, 2019. The cover was revealed last week on culturess.com, and the reviewer said this about it:

“Betsy gets to star on the cover all by herself. Say No to the Duke doesn’t really rely on the fact that its heroine is unclothed. Instead, she’s overdressed, with a dress pulled away to reveal breeches and boots underneath. Don’t worry, though: it’s plot-relevant. Even if it weren’t, it’s a great character note for Betsy. We know she’s a bit adventurous, to put it mildly. Why wouldn’t she don men’s clothes and go out on her own?”

You can read the full Chapter 1 excerpt (longer than any excerpt previously posted anywhere!), and pre-order your copy.

Say No to the Duke is a full six months away, but you can binge this series in the meantime!

← Back to Eloisa's Full News Feed