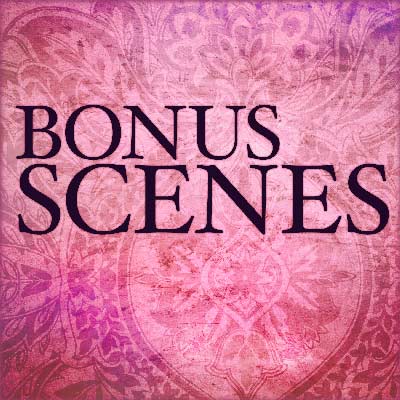 Prequel to My American Duchess 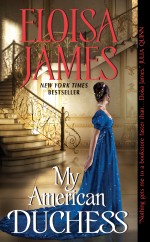 Prequel to My American Duchess

“It must be so terribly odd to find your country at war with your husband’s
country,” Mrs. Seton-Owsley said, idly fanning herself. “How on earth do you and Mr.
Pelford manage to stay civil with each other? He’s so important to our new government.”

Clementina Pelford, who had been married for all of three months, two weeks and
five days, choked back a smile. She and her darling James didn’t have time to wrangle
about politics, not when they kept… She cut that thought off. She certainly didn’t want
to turn pink before the stodgiest of stodgy Boston matrons.

“But I am an American,” she said simply. And she was. She loved the bursting-with-excitement
young nation. She was proud to be a part of it and even prouder of the
leading role her husband was taking in shaping policies and ideas.

“What Mother really wants to ask,” said Julia Seton-Owsley, seating herself
beside Clementina with a swish of silk skirts and a wicked grin, “is whether you regret
marrying that handsome husband of yours, and wish you were back in the land of the
infidels—England—flirting with a duke.”

“Julia!” her mother said sharply, coming to her feet with offended dignity. “I must
beg you not to behave in such an impudent and ill-bred fashion. You shame me.”

“I’m sorry, Mother,” Julia said obediently, as she and Clementina leapt to their
feet and curtsied.

As soon as her mother stalked away, Julia sank back on the couch and wrinkled
her nose. “Ask me whether I would like to marry a duke.”

Clementina smiled at her. “You have no idea how stodgy and arrogant those
gentlemen are.” She gave a little shudder. “To be honest, I was never happier than when
Father decided to move to Boston.”

“He must have been shocked to the bone when you chose to marry Mr. Pelford,
though,” Julia said. “Not that I blame you.” She snapped open her fan and whispered,
“Your husband is by far the most delicious man in this room.”

Clementia laughed. John stood out in any crowd. He was tall, with a windblown,
confidence about him. His cheekbones and the line of his jaw were all male. And
under that wig, he had the most beautiful tumbling black hair Clementina had ever seen.

That wasn’t even mentioning his blue eyes, precisely the color of a summer’s day,
that regarded the world with a piercing intelligence.

He’d been one of the youngest men elected to the Continental Congress, and
Clementina had the fixed opinion that she had married a future president. President was
better than a mere duke!

“Seriously,” Julia said. “Did your father have a conniption when Mr. Pelford
asked for your hand?”

Clementina lowered her voice. “Oh, you can imagine. He kept saying, ‘This
simply won’t do, Clementina! Not a family of consequence; there isn’t even a judge in
his direct line.”

Her eyes were following John, Clementina realized. That wasn’t a surprise: her
husband was the sort of man whom everyone watched. They couldn’t help it. He drew
attention like a beacon.

Just at that moment, John turned about. His eyes passed quickly over the room,
apparently not even seeing the inviting smiles from women of all ages.

With a little internal shiver she waited…until he saw her.

She hoped she never, ever got used to the way his eyes changed, growing warm
and possessive. Loving and sensual at the same time.

Julia gave a little moan next to her. “That’s why I’m not going to marry Mr.
Rushford, no matter what my father says,” she whispered. “I’m waiting for someone like
your Mr. Pelford. Someone who thinks I’m the best idea that he’s ever had.”

Clementina smiled at her, and then quickly looked up because John’s long legs
had already carried him across the room and he was drawing her to her feet. “If you’d
excuse us, Miss Seton-Owsley,” he said to Julia, “I have a busy day tomorrow.”

That was an excuse; she could see the wicked glint in her husband’s eyes that told
her he wanted her home for something that had nothing to do with sleep. But still…

“We’re only a few days from Christmas!” she protested. “You can’t possibly
mean to work tomorrow, John. Why we have to put greens all around the house, and find
a big bundle of mistletoe, and make up the gifts for the servants. Oh, and make up the
kissing bough!”

Julia rose with a laugh. “Don’t let my mother hear you talking about those pagan
customs.” She started walking away but threw over her shoulder, “You’ll ruin all that
good work you did by promising her that you’re an American.”

“Clementina,” John said, his voice low and honey-sweet. “We must return home.
It’s an emergency.”

She took a deep breath, her eyes locked on his.

“I need you,” her husband said, not even pitching his voice all that low.

Clementina took a hasty look over his shoulder, but although there were plenty of
curious people watching, no one was within ear shot. “But I’m enjoying the party,” she
said quite untruthfully, twinkling at him. There was nothing she enjoyed more than
teasing John. “Surely you don’t want to leave before Mrs. Seton-Ownsley serves that
pineapple cake she’s boasting about.”

She smiled at him innocently, though her breath turned shallow just at the look in
his eyes. He craved her madly, and she felt the same way for him.

His large hands went around her waist and he bent his mouth to her ear. “I don’t
give a damn about pineapples, Clementina. I want something far sweeter, and I intend
to…dine all night.”

With a little gasp, she pushed him away. Sure enough, she could feel her cheeks
going as red as fire. “If we go home, it’s because we are going to start our Christmas
preparations!”

John threw back his head and laughed, then took her hand and began to tow her
straight toward the door. Later, when they were in the snug carriage, heading home to
Beacon Hill, Clementina was still thinking about those preparations, even though she had
no illusions that they were going anywhere but straight to their bedchamber.

“I love being an American, but that doesn’t mean I want to give up Christmas!”

John had pushed her curls to the side so he could drop kisses on the back of her
neck. “Do you know how soft your skin is?” he asked, rather dreamily. “No one has ever
kissed you here but me.”

“John!” she said, pulling away. “Did you hear me? I love Christmas, and I mean
to honor it and keep it every year.”

His blue eyes smiled down at her. “Then we shall celebrate all your British
customs, even if we’re branded as the most heathen household in Boston. After all, I
thank God every day for the rebellious nature that led you to marry me.”

She laughed, and then she couldn’t—she simply couldn’t—keep her secret any
longer. “I have a Christmas present for you,” she whispered.

He caught her face in both his hands and kissed her, so sweetly that her heart
thumped. “I don’t need any presents, because I have you. I don’t need anyone or
anything besides that.”

“Are you certain? If she’s a girl, we’ll name her Merry,” Clementina said, a laugh
trembling in her voice. “That way, we’ll be honoring Christmas all year around.”

He folded her into his arms and said in a hoarse voice, “I can’t imagine ever being
given a present that I would love more, dear heart. Now you’ve given me everything in
the world that I ever desired.”

Clementina nestled close, one hand on her tummy where baby Merry was kicking
in her sleep, absorbing all of her mother’s happy, rebellious nature.

And few days later, Clementina and John celebrated a merry, rebellious
English/American Christmas, shocking and delighting the servants and all their friends.
But most importantly, by naming their daughter Merry they did, indeed, honor the spirit
of Christmas all year around.