Inside Say Yes to the Duke 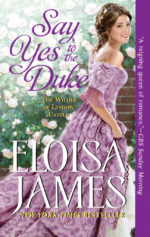 The backbone of Say Yes springs from unhappy memories of middle school: I was miserably convinced that I was deeply unattractive and would never fit in anywhere. That private horror was exacerbated by overhearing a few unkind remarks. Viola, the heroine of Say Yes, is absolutely convinced that as an adopted child, she’s not a “real” Wilde. And when she overhears Devin say precisely that, it confirms all her biggest fears. Viola strolls out from behind that curtain able to be herself with Devin because she isn’t hampered by fear any longer. And of course Devin takes one look at her and realizes that he has no interest in a Wilde, real or not: he only wants to marry Viola.

Shakespeare often inspires various parts of my books, since I spend my days teaching his plays. It’s natural to learn (and crib) from the master. In this case, Say Yes to the Duke has a direct link to The Tempest, which I was teaching while brainstorming the plot. In The Tempest, Miranda is marooned on a magical island with her father at the age of three, just as Viola is marooned with her mother in Lindow Castle (arguably a magical place) at the age of two. When Miranda’s father decides it’s time for her to marry, he calls up a storm and shipwrecks a young prince on the isle. The parallel in my book is when the Duke of Lindow throws a debut ball for Viola and Joan and summons all of high society, including the hero of the book, Devin. And finally, in The Tempest, Miranda’s father makes the young prince carry logs, asking him to perform menial labor in order to prove that he loves Miranda more than his title and his dignity. I borrowed that tactic from Shakespeare and pushed Devin out of his comfort zone as Viola (and marriage) led to him throwing off his ducal ways and even hiding in a closet.

Say Yes to the Duke had its book birthday in the midst of the pandemic, at a time when I had been sheltering in place, in New York City, for over two months. I’ll finish this Inside Take by saying that the praise I’ve been proudest of, in my entire career, came with this book, as readers wrote to say that diving into my novel helped them escape from the fear, anxiety, and anguish of a world wracked by a pandemic. I hope it does the same for you.

View videos of Eloisa during the quarantine, reading from Say Yes to the Duke, from the first of the Lindow Castle books: Wilde in Love, and also from her first book, Potent Pleasures.

Also from spring 2020: this most excellent video interview where Eloisa talks Shakespeare (specifically King Lear), quarantine, and Say Yes to the Duke.