Book 1 in the Pleasures series

Nothing is more seductive than temptation.

Reckless desire sends Charlotte Daicheston into the garden with a dashing masked stranger. He’s powerful, unforgettable, a devastatingly handsome footman who lures her–not against her will–into a grand indiscretion at a masquerade ball. Then he vanishes.

Several years later, after Charlotte has made her dazzling debut in London society, they meet again. But the rogue is no footman. He’s rich, titled, and he doesn’t remember Charlotte. Worse, he’s the subject of some scandalous gossip: rumor has it, the earl’s virility is in question.

Charlotte, who knows all too intimately the power of his passion, is stunned by the gossip that has set society ablaze. At last, there can be a storybook ending…unless, of course, Charlotte’s one mad indiscretion had not been with him at all… 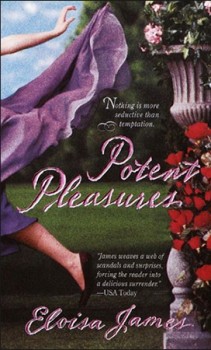 “The depth of characterizations, the steady progression of the plot and the tongue-in-cheek title will attract readers who may just greet James as the next Amanda Quick.”

“Plan on reading this book in one seating.”

Charlotte began to make her way down the staircase, struggling to see whether she could glimpse Sissy, by looking over people’s shoulders. She didn’t seem to be in the ballroom. She’s probably kissing someone on a balcony, Charlotte thought scornfully, forgetting that she herself had almost done precisely that just ten minutes before.

Toward the bottom of the staircase she suddenly thought she spied Sissy’s plumes. Sissy had taken to wearing an elaborate set of three or four dyed ostrich feathers pinned to the back of her hair, and they did make her a little easier to spot in a crowd. Charlotte privately thought the hairstyle was dreadful, like the nodding plumes on one of the Queen’s guard horses.

She was on tiptoe just three or four steps from the bottom, straining to see where those gaudy plumes had gone, when her right foot slipped out from under her, striking the person at the bottom of the stairs squarely in the lower back.

“Ooof!” he said, and then thump! went Charlotte’s bottom against the marble step. Tears came to her eyes as her back hit the marble stair riser.

The person she had struck turned around and squatted before her. Charlotte raised her eyes. She began to say, “I’m so sorry,” but the words failed in her mouth.

He was larger than she remembered, and handsomer. His thighs strained through his thin pantaloons; she didn’t remember his having such wide shoulders. But his eyes were precisely as velvety dark as she had remembered, and his hair was the same black-silver curls, falling over his forehead in the French manner. Monsieur Pompelmousse would approve, Charlotte thought idiotically.

Suddenly Charlotte realized she was staring. Her eyes flew to his and she turned faintly rosy. The man was staring back at her, his eyebrows slightly furrowed. Charlotte tried to think of something to say. Finally she blurted out,

“What are you doing here?” Instantly she felt acutely stupid. Of course he wasn’t a footman! He was wearing formal dress, and besides…how could she have ever thought such a thing? He had an undeniable air of command and gentlemanly breeding.

His winged eyebrows flew up. “Where else should I be?” the man asked, still balancing on his heels.

Charlotte blushed again. “Oh, you know, at a masked ball,” she said vaguely. “This time I knocked you over,” she added.

Alex frowned again. What on earth was this beautiful girl talking about? Just his luck: he’d met the first interesting woman of the whole evening, and she was off her rocker. His glance drifted down. From here, he could see straight into her gown. She had the most beautiful, creamy breasts he’d ever seen. They were lavishly round, and soft, and perfectly shaped. His hand actually twitched. My God! He’d almost touched her right here. Suddenly he became aware of piping little voices around them, enquiring about injuries and calling for help.

He reached out a hand and brought her to her feet.

“Is your back all right?” Alex asked, ignoring her nonsensical comment about masked-balls. Now he liked her even more. She was just the right height, tall, and when she raised her head her mouth was kissably close to his. Alex drew her over to the side of the hall and without even thinking, reached out to rub the middle of her back where she must have struck the stairs.

His hand instantly stopped. Her gown was so thin he could feel the rising swell of her bottom, and he was rocked by one the most powerful surges of lust he had ever felt. He must be losing his mind, he decided. It had been too long since he had a woman.

Charlotte didn’t even feel his hand on her back, or notice when he snatched it away. “Did you… do you remember me?” she asked, finally, looking straight into his eyes.

Alex frowned again. He’d never met her, that was certain. He looked at her carefully. She had a delectable, triangular face enveloped in soft curls: a perfect straight nose, and high cheekbones. Her mouth was a natural dark red. Her eyebrows were exquisite: high and winged, a woman’s version of his own. For a second, some memory stirred, but…

“I’ve never met you,” Alex said, smiling at her. He wouldn’t forget meeting a woman as beautiful as this.

Charlotte’s mouth fell open slightly. He took someone’s virginity, and he didn’t even remember? What were men anyway? Did he do that every week?

Alex took her arm again and led her towards the parlor to the right.

“You must have met my brother,” he said conversationally. “We’re twins.” He looked down at her and smiled wickedly. “You are not the first to mistake the two of us.”

Charlotte smiled back without thinking, and her heart gave a huge thump. “You are a twin?” she repeated. Her mind seemed to have gone numb.

“Yes,” Alex said cheerfully, having figured out the whole problem. The girl wasn’t insane; she was just thinking of Patrick. “Even our mother can’t always tell us apart.”

Charlotte looked up at him. She knew exactly who he was — well, she didn’t know who he was, but she knew that he was the one. She even recognized the dimple in his right cheek and the shape of his lips. But he didn’t seem to be pretending; he genuinely didn’t remember meeting her. Charlotte’s heart sunk. Her virginity had mattered so little that he didn’t even remember taking it.

Her steps slowed. Where were they going, anyway? She had to get back upstairs, to her mother. She calmly took her arm out of his grasp and brought them to a halt.

“Thank you so much for picking me up, sir,’ she said softly, extending her hand. “I apologize for knocking you to the floor.” Without waiting for his reply she turned and almost — not quite — dashed up the stairs.

Suddenly he heard an anxious voice at his ear and turned to see Braddon. “What do you think?” Braddon asked.

“Isn’t she devastating?” Alex said, grasping the whole situation in a split second. “I’m going to marry her. What did you say her name was?”

Potent Pleasures is available in the following formats:

Potent Pleasures is Book 1 in the Pleasures series.