The Lady Most Likely…

Book 1 in the Ladies Most series

Hugh Dunne, the Earl of Briarly, needs a wife, so his sister hands him a list of delectable damsels and promises to invite them—and a few other gentlemen—to her country house for what is sure to be the event of the season. Hugh will have time to woo whichever lady he most desires. Unless someone else snatches her first.

• The always outspoken Miss Katherine Peyton.
• The impossibly beautiful (and painfully shy) Miss Gwendolyn Passmore.
• The widowed Lady Georgina Sorrell (who has no plans to marry, ever).

And your hostess, Lady Carolyn Finchley, an irrepressible matchmaker with romantic plans for every last one of them—especially THE LADY MOST LIKELY to marry an eligible Earl.

The Lady Most Likely is an utterly charming concoction, a novel written in three parts by three very good friends: Julia Quinn, Connie Brockway, and myself. We wrote this novel on a visit to New Orleans, sitting around madly plotting and writing during the day, then eating fabulous food at night. I think this novel is even more fun to read than an average romance–because you have all the delight of our three voices both separately, and woven together. 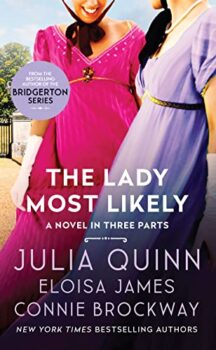 Jump to: Excerpt • Reviews • The Inside Take • Series Reading Order

“This triple threat of talent delivers a delightful continuum…”

It was only seven in the evening and the air was warm. The sky was the deep pearly blue that promised twilight. Lady Georgina Sorrell wandered into the rose gardens, met by the faint hum of bees catching last sips from roses warmed by the sun.

The stables were beyond the gardens, through a little stone archway, and down a pebbled path. By all rights the man she was looking for should be in the drawing room, chattering to debutantes.

Hugh Theodore Dunne, Earl of Briarly, had lost the first lady on his list to his best friend, and the second to Captain Oakes. He should be at his sister’s side, imploring her for the name of a third candidate. But Hugh hadn’t made it to the table earlier than five minutes after the gong any day in the past week.

The air changed as she left the garden; the earthy smell of warm dirt and manure made roses seem effeminate and cloying. She walked toward the large ring adjacent to the stables. Light poured through the stable window to the rear, but the rest of the ring was in deep shadow.

For a moment she thought he wasn’t here, but then she saw Hugh with his back to her, riding Richelieu slowly around the ring. She leaned against the fence, listening to the deep rumble of his voice as he talked to his mount. The horse was listening intently, perking first one ear and then the other.

Richelieu was a rangy, powerful animal, his coat a color of rich brown so dark that it looked near black in this light. There was something of the devil about him, in the tilt of his eyes and the way he kept shaking his bridle as if answering Hugh.

But it wasn’t Richelieu who caught Georgina’s attention. It was Hugh. Hugh, who was practically her older brother. Hugh, who had picked her off gravel paths when she’d sprawled, wiped her tears, likely wiped her nose, if not her bottom.

He wasn’t wearing a shirt. He was riding his horse around the ring without a scrap of cloth on his upper body. Just like that, her heart sped up and started thudding in her chest.

Her memory presented her, willy-nilly, with a picture of her marriage, one that made her husband look like a faded image in a mirror. Richard had been as sleek and white-skinned as she was. He hadn’t been frail, until he was ill, but his arms were wiry and his chest hairless. He was neat, and elegant, and resembled a well-groomed swallow.

But Hugh — nothing about Hugh could be described as wiry, or sleek. His chest was pure muscle, the kind that came from fighting thorough-bred horses for mastery, day after day. Even in this light, she could see that his shoulders were enormous, his arms rippled with muscles as he loosely held the reins. He was turned to the side, slightly away from her, so she could see how the muscles marched down his broad back.

Her fingers twitched as her imagination leapt straight from watching to touching, to running her hands down those muscles and feeling him live and strong in her arms. He was like a medieval champion, practicing to defend his lady, or to start a crusade.

She forgot to breath, willing him to turn so she could see his chest. Finally they reached the curve of the stable yard, and Richelieu turned toward her. The horse began to prance a little, lifting up his legs in a graceful, flirty dance.

Hugh laughed down at him, still talking. His skin was a dark honey, so he had probably made a habit of throwing off his shirt when he got too hot. His chest was shadowed with hair that darkened to an arrow just before disappearing into his breeches.

Wincing at her own foolishness, she discarded the idea of a medieval knight and turned him to a god… Apollo, training a new horse so that he could ride the skies to awake the sun.

Georgina swallowed. She should leave. Now. Before Hugh saw her, before she acted on the promptings of her over-heated imagination.

He raised his eyes and saw her. It was a moment she never forgot, in the whole of her life: the great bronzed man astride a perfect horse, backed by sky the color of a dark sapphire. Hugh looked as remote and untouchable as any Greek deity – and yet the moment their eyes met, something flared to life in his face that she had never seen on a man’s face before.

The Lady Most Likely… is available in the following formats:

The Lady Most Likely… is Book 1 in the Ladies Most series.

Book 1: The Lady Most Likely…

Book 2: The Lady Most Willing…

Book Collection: The Ladies Most…