A Novella in the Essex Sisters series

Enjoy Eloisa's witty, sexy novella about a virgin widow and a rake with something to prove.

Eighteen years ago (give or take a few) the Honorable Oliver Berwick blackened his own soul, leaving him hardened and resolutely single.

When the chance for redemption in the form of a country house party invitation comes his way, Oliver is determined to prove himself a gentleman.

Until he breaks all the codes of gentlemanly behavior…once again. 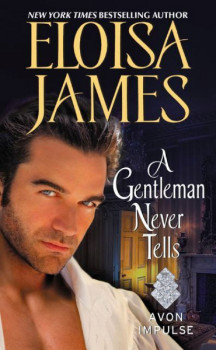 See all ordering options, including international and more
↓

“(Eloisa) James is a storyteller extraordinaire…”

“(Eloisa) James is a storyteller extraordinaire…”

“I would prefer to take supper on a tray.” Lizzie didn’t look up from her book, because meeting her sister’s eyes would only encourage her.

She should have known Catrina wouldn’t back down. “Lizzie Troutt, your husband died over a year ago.”

In his mistress’s bed.

“Lizzie,” Cat said ominously, sounding more like an older sister—which she was—with every word, “if you don’t get out of that bed, I shall drag you out. By your hair!”

Lizzie felt a spark of real annoyance. “You already dragged me to your house for this visit. The least you could do is to allow me to read my book in peace.”

“Ever since you arrived yesterday, all you’ve done is read!” Cat retorted.

“I like reading. And forgive me if I point out that Tolbert is not precisely a hotbed of social activity.” Cat and her husband, Lord Windingham, lived deep in Suffolk, in a dilapidated manor house surrounded by fields of sheep.

“That is precisely why we gather friends for dinner. Lord Dunford-Dale is coming tonight, and I need you to even the numbers. That means getting up, Lizzie. Bathing. Doing your hair. Putting on a gown that hasn’t been dyed black would help, too. You look like a dispirited crow, if you want the truth.”

Lizzie didn’t want the truth. In fact, she felt such a stab of anger that she had to fold her lips tightly together or she would scream at Cat.

It wasn’t her sister’s fault. It wasn’t anyone’s fault except her late husband’s, and he was definitely late—i.e., dead.

“I know you feel ashamed to be in company,” her sister continued, energetically digging her own grave, as far as Lizzie was concerned. “Unfortunately, most people are aware the circumstances of your marriage, not to mention the fact that Adrian was so imprudent as to die away from home.”

That was one way of putting it.

“You make it sound as if he dropped a teacup,” Lizzie observed, unable to stop herself. “I would call the fact that Adrian died in the act of tupping Sadie Sprinkle inconsiderate in the extreme.”

“I refuse to allow you to wither away in bed simply because your husband was infatuated with Shady Sadie,” Cat said, using the term by which the gossip rags had referred to Adrian’s mistress. “You must put all that behind you. Sadie has another protector, and you are out of mourning. It’s time to stop hiding.”

“I am not hiding,” Lizzie said, stung. “I take fresh air and moderate exercise every day. I simply like reading in bed. Or in a chair.”

Or anywhere else, to tell the truth. Reading in a peaceful garden was an excellent way to take fresh air.

“Moderate exercise,” her sister said with palpable loathing. “You used to ride every day, for pleasure. We would practice archery on a fine day like this, or roam about the countryside, not sit inside reading.”

“Adrian’s stables were part of the entail, and went to his cousin,” Lizzie said, turning the page. She hadn’t read a word, but she was hoping that a show of indifference would drive her sister from the room.

“Not the mare that Papa gave you when you turned fourteen!” her sister gasped.

Showing masterly control, Lizzie didn’t roll her eyes. “A wife has no true possessions,” she said flatly. “Under the law, they belong to her husband, and Perdita was, therefore, transferred to the heir.”

“It wasn’t so terrible,” Lizzie said, meaning it. “I went to the auction, and Perdita went to a family with a young girl. I’m certain that she is well cared for and happy.”

“Do you realize that by staying home and wearing black, you give the illusion that you are grieving for your husband?”

Lizzie’s hands tightened around her book. “Do you know what being a widow entails, Cat?”

“Wearing ugly black dresses for the rest of your natural life?”

“It means that I never again need put myself under the control of a man—any man. So, no, I have no interest in joining you at dinner. I know perfectly well that Lord Dimble-Dumble has been summoned to audition as my next husband. I don’t want him. I’d be more likely to come to dinner if you had invited the butcher.”

“I couldn’t do that,” Cat said, in a sudden digression. “Mr. Lyddle has developed a most unfortunate addiction to strong ale, and he’s regularly found lying about in the gutter singing, rather than butchering meat.”

“Who does the butchering now?” Lizzie asked, deciding to take a walk to the village and see this interesting musical event herself.

“His wife. My housekeeper says that she can get better cuts at a lower price these days. You’re trying to distract me with talk of singing drunkards,” Cat said, unfairly. “Let’s discuss your future.”

“We might begin with the fact that you were never in love with Adrian.” Cat began walking around the bedchamber, waving her hands as she waxed eloquent about her late brother-in-law’s flaws.

She was preaching to the choir, so Lizzie stopped listening and just watched Cat pacing back and forth. How could it be that her older sister was positively frothing with life and energy and passion, while Lizzie felt like a tired, pale shadow?

Her hand crept toward her book. It wasn’t the most interesting novel in the world, but it had the inexpressible charm of being new.

Over the last eighteen months, Lizzie had read every novel she owned three times over. She would be quickly bankrupted if she bought more than two books a week, so one of the best things about visiting Telford Manor was access to her sister’s library.

Cat appeared to be hopeless at arranging a refurbishment of the manor—which desperately needed it—but she was very good at ordering novels. And clothing. If Lizzie looked like a black crow, Cat was a chic French peacock.

Lizzie raised her knees, surreptitiously propped her book against them, and slipped back in the story of Eveline, a sixteen-year-old girl being forced to marry an old man. She herself had been twenty when she walked down the aisle.

Beggars can’t be choosers, her father had told her.

Her book suddenly vanished. “No reading!”

Cat was holding the novel above her head, for all the world as if they were children again. Lizzie used to hope that someday she’d grow up to be as commanding as her sister, but she had given up that idea long ago.

That sounded resentful, but Lizzie didn’t actually feel bitter. She would hate to be the center of attention. She wound her arms around her knees and propped her chin on them. “Cat, may I have my book back, please? It was a hard journey, and I’m tired.”

“What do you mean, a hard journey? It can’t have been more than a day and a half!”

“My coach is over twenty years old and the springs are worn out. It bounced so hard on the post road that I couldn’t keep my eyes on the page, and my tailbone still hurts.”

“If your jointure won’t extend to a new vehicle, Joshua or Papa would be happy to buy you a coach.”

Lizzie turned her head, putting her right cheek on her knees, and closed her eyes. “No.”

She heard her sister drop into the chair by the side of the bed. Then she heard a sigh. “Papa is getting old, Lizzie. He made a terrible mistake, and he knows it. He misses you. If you would just pay him a visit . . .”

Why would she visit the father who had turned her away when she ran to him in desperation? The father who had known precisely what a disaster her marriage would be, but didn’t bother to warn her?

An hour or so after their wedding ceremony, Adrian had brought Lizzie, still wrapped in her bridal veil, to his mother’s faded, musty house, and informed her that he had no intention of living with her.

Not only that, but he was late to meet his lover for tea.

It had happened almost six years ago, but she could still remember her stupefaction. She’d been such a silly goose.

“But where do you live?” she had stammered.

“I bought Sadie a house, and we live there,” Adrian had said casually. When she frowned in confusion, he had added impatiently, “Sadie. Didn’t your father tell you her name?”

For the first time—and in her experience, the last time—her husband had been a little defensive, even a trifle ashamed. “I never lied. He knows perfectly well that we will lead separate lives.”

“Perhaps you should explain to me,” Lizzie had said, “because my father unaccountably forgot to mention it. As did you, I might add.”

Adrian had unemotionally laid out the terms of her marriage. It seemed her father had paid a great deal of money to buy his daughter the title of Lady Troutt. For his part, Adrian had wed her for her dowry, and because he needed someone to care for his mother.

“The estate is entailed,” he had told her, glancing around the musty sitting room. “It goes to some distant cousin, along with the title, of course. I told your father that I wouldn’t be averse to trying for a child, once we’ve had time to get used to each other.”

Lizzie had just gaped at him.

“But we can’t bother with that now,” Adrian had told her briskly. “Sadie is upset about this mess, naturally enough. I promised her I’d be home by four. My mother takes her luncheon on a tray. There are a couple of maids, but it would be good if you could bring it in yourself. She complains of being lonely.”

After that, he left.

Only to be sent back to her husband’s house.

There was no point in revisiting her father’s line of reasoning. Suffice it to say that no woman—even one who had abundant sensuality and beauty, which Lizzie did not— was capable of seducing a man who didn’t return to the house for a fortnight.

A man who doesn’t bother to consummate his marriage until he’s suffered a heart seizure and has, as the vulgar might put it, been given notice to quit.

A man who despises his lower-class wife, and never bothers to hide it.

A Gentleman Never Tells is available in the following formats:

A Gentleman Never Tells is a novella in the Essex Sisters series.

Book 1: Much Ado About You

Book 3: The Taming of the Duke