Book 6 in the Wildes of Lindow Castle series

Eloisa James returns to the Wildes of Lindow Castle series with the next Wilde child who runs and joins a theatre troupe — and the duke who tries to save her reputation.

He wants a prim and proper duchess, not the Wildest of the Wildes!

Already notorious for the golden hair that proves her mother’s infidelity, Lady Joan can’t seem to avoid scandals, but her latest escapade may finally ruin her: she’s determined to perform the title role of a prince—in breeches, naturally.

She has the perfect model for an aristocratic male in mind: Thaddeus Erskine Shaw, Viscount Greywick, a man who scorned the very idea of marrying her.

Not that Joan would want such a dubious honor, of course.

For years, Thaddeus has avoided the one Wilde who shakes his composure, but he’s horrified when he grasps the danger Joan’s putting herself in. Staring into her defiant eyes, he makes the grim vow that he’ll keep her safe.

He strikes a bargain: after one performance, the lady must return to her father’s castle and marry one of three gentlemen whom he deems acceptable.

Not including him, of course. 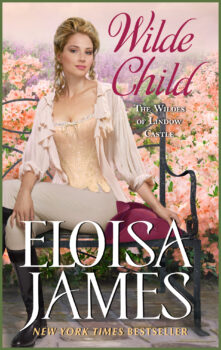 “A story as wild as the heroine’s family name and one that will reward romance fans who want a funny book about an unusual heroine.” 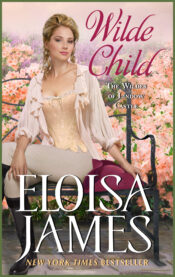 “I need curves if you want me to play a woman’s role,” Otis Murgatroyd complained, frowning at the mirror.

“I’m trying,” Joan said, panting as she hauled on his corset strings. “Suck in your stomach!”

“My understanding was that whalebones did the work,” Otis grumbled. “Madame Turcotte’s advertisements claim that her corsets can put a bend in a brick wall.”

Joan, known to the world as Lady Joan Wilde, daughter of the Duke of Lindow, gave a final wrench that resulted in a slight indention around her best friend’s middle. Grimacing at her reddened fingers, she tied off the corset. “Now the bustle. At least a robe à l’anglaise doesn’t have panniers.”

Otis’s gown had been rescued from the attic and was out of fashion, but he wasn’t going into polite society dressed as a woman, merely onto the private stage in Lindow Castle. Thirty minutes later, Joan collapsed on the sofa, worn out and vowing to raise her maid’s wages.

Otis, on the other hand, looked fresh as the proverbial daisy in a green petticoat and yellow striped organdy apron with strawberry-colored overskirts and a matching bodice with a lace fichu frothing up to his chin.

“Your wig is slipping,” Joan pointed out. He was wearing what her Aunt Knowe called a “gooseberry wig” with two frizzled bunches over the ears that resembled a gooseberry bush.

Otis adjusted the wig, then picked up a hat of strawberry silk adorned with a dark green bow and plopped it on top of the wig, adjusting the bow to a rakish angle. “I like wearing all these colors.”

“You already aspire to the rainbow,” Joan said wryly. In the three years she’d known Otis, his clothing had grown ever more outrageous, including an infamous appearance at one of the queen’s drawing rooms wearing an apricot brocade coat with purple breeches.

“But now I’m curved like one,” Otis said, guffawing.

That was true. As a man, Otis was impishly handsome, if short, but dressed in women’s clothing, he became startlingly unattractive. “Whereas you look beautiful as ever in breeches,” he added.

Joan shrugged. She had always seen her beauty as a detriment rather than an asset, since her golden hair, blue eyes, and perfect skin made her the spitting image of the handsome Prussian count with whom her mother had bolted, causing a scandal.

More than one gentleman had rejected the very idea of marrying a woman whose hair color confirmed her illegitimacy.

Luckily, Joan had grown up in Lindow Castle, surrounded by a huge, loving family. She had always known who she was—a Wilde—and what’s more, that the duke would murder anyone who suggested to his face that she wasn’t his daughter.

Standing up and turning to the mirror, instead of a lady she saw a golden-haired, blue-eyed stripling dressed in a sober coat of dusky emerald with silver-thread embroidery down the front and around the cuffs.

Young and slender, but a man, with all a man’s privileges.

She grinned at herself. “My favorite aspect of this costume is the rapier.” She put her hand on the hilt and struck a pose, one knee bent before her.

“If the matrons get wind of your legs in those breeches,” Otis said, “you’ll be thrown out of polite society. Finally.”

Joan shrugged again, having spent the last two years on the edge of being ruined. Sometimes the scandal wasn’t her fault, such as when young Lord Stuckley had kidnapped her from a ball, planning a forced wedding. She had knocked him senseless with the hilt of his own sword, an action that the ton interpreted as unladylike. The fact that she had returned to the ball and danced the night away was ruled an even greater affront to refined sensibilities.

Her father had been livid at Stuckley, not Joan, but he wasn’t happy when Joan was caught kissing a marquess in an arbor—and refused the offer to become a marchioness. A few weeks after that, she kissed the Honorable Anthony Froude on a balcony in full sight of the ballroom. That scandal burned even hotter after she informed Lady Froude that her son’s kisses were only intoxicating because he had imbibed a bottle of brandy.

“Father gave me permission to wear breeches for this play. He knows I’m tired of performing damsels in distress,”

Joan said now. “Though I might add that I’m forbidden to leave the grounds in male attire. The duke didn’t extend the command to you in a gown, though.”

“I assume we’re heading straight for the castle gate,” Otis said, the veteran of many of Joan’s schemes.

“Obviously, we need to test our costumes in public,” Joan replied, putting on her wig, a small one that fit closely to her braided hair, with only two neat rolls over each ear and a short queue at the back. “Your man did a good job with your eyebrows, but you need powder and some hairpins to hold your wig.”

Otis moved to sit down on the stool before her dressing table but misjudged, he and his enormous bustle ending up on the floor.

He sprawled in a jumble of skirts, looking at her. “Why would anyone in their right mind wear a bustle?”

“Up you go,” Joan said, holding out her hand and ignoring a question for which she had no answer. She hauled him upright, retrieved his wig, and pinned on his hat.

“I would rather practice my lines than go for a walk,” Otis said, picking up Joan’s powder puff and generously dusting his face. “The only line I remember from Hamlet is the prince’s daddy moaning Remember me.”

“Something’s rotten in the state of Denmark,” Joan said cheerfully. “Hamlet’s father was killed by his uncle, who took the kingdom and married Hamlet’s mother. Hamlet scolds his mother, breaks off relations with Ophelia—that’s you—and takes a trip to sea with pirates. He finally gets around to revenge, and by the last act everyone is dead.”

“Including Ophelia or rather, me,” Otis pointed out. “Not my sort of play, I don’t mind telling you. As I recall, she goes on and on about Hamlet not loving her. Memorization was never my forte. What’s more, Hamlet would have to be blind to fall in love with me.”

He gestured toward the mirror. Joan had to admit that powder was doing nothing to hide Otis’s angular jaw.

“The key to acting is imagination,” she advised. “Concentrate on a sad lady. Remember how Miss Trestle wept after her spaniel died? Imitate her facial expression.”

Joan couldn’t do needlework; she couldn’t play the pianoforte; and she was rubbish at watercoloring. Her only skill was acting.

Unfortunately, ladies were only allowed to perform dainty, ladylike parts, and then only in the occasional private performance. She was sick of playing fair maidens waiting for a prince to save them. She wanted to play the prince who fought pirates.

Thank goodness her father had finally given in to her entreaties to be allowed to play a prince—albeit with the proviso that one of their family or friends must play Hamlet’s beloved. When the females in her family had unanimously declined to act Ophelia, even for one night, her best friend, Otis, had stepped forward.

He tried out a pout that made him look as if he had dyspepsia. “I assume you’re choosing someone royal to imitate?”

“Close enough,” Joan confirmed. Viscount Greywick, future Duke of Eversley, was the most pompous, irritating man she’d ever met. He had courted two of her sisters, but thankfully, both Betsy and Viola had rejected him.

She concentrated for a moment to make sure that she could picture the set of his shoulders (arrogant, of course), the turn of his lips (unamused), and his gaze (verging on godlike because he never did a single thing wrong).

According to Jeremy, one of her brothers-in-law, Greywick had even been perfect at Eton.

A credit to the English peerage.

Someday Greywick would be a duke, and as far as Joan could see, he never forgot that fact, even for a moment.

Plus, he and his mother were visiting the castle at the moment and would attend the performance of Hamlet.

There was something deliciously amusing about the idea of performing Greywick before the man himself.

“Not bad,” Otis said, waggling his eyebrows. “You definitely have a royal look about you. But was Hamlet so condescending? I thought he was a nice chap.”

“Hamlet’s a prince,” Joan said. “He’s been told he’s better than everyone else from the moment he learned to walk.”

“I’d rather be arrogant than melancholic.” Otis tried pouting again. “Ho-hum, I’m such a watering pot. I think I’ll jump in a brook because the prince doesn’t appreciate my curves.”

“Let’s go,” Joan said, heading for the door. “We can practice our lines in the library.”

“You go ahead. I need to use the chamber pot,” Otis said. “Somehow.” He lifted his heavy skirts and let them fall to the floor.

Joan laughed. “It’s not easy being a lady. I’ll meet you downstairs.”

Out in the corridor, she stopped for a moment to readjust her rapier. The belt belonged to one of her brothers and wasn’t made to circle a woman’s hips.

Joan was slender, but she curved in the right places—or the wrong ones, when it came to rapiers.

She took the back stairs in a shortcut to the library, but once she reached the ground floor, the belt began slipping off again. Head bent, she was wrestling with the buckle as she turned a corner and walked straight into someone.

“Sorry!” she said, looking up.

Wilde Child is available in the following formats:

Wilde Child is Book 6 in the Wildes of Lindow Castle series.

Book 2: Too Wilde to Wed

Book 3: Born to be Wilde

Book 5: Say Yes to the Duke