All of What's New!

For the most up-to-date info about the newest book, what’s coming soon, and more, this page has it all.

Eloisa has been accepting invitations to speak all over the place in 2016! So far, we’re listing events in Pennsylvania, Milwaukee, WI, Las Vegas, Minnesota and Virginia with more to come. Hopefully she’ll see you at one of them!

What in the World is Eloisa Working On?

Just a note from Team Eloisa that My American Duchess, a stand alone historical, has just been sent to press! Have you seen the gorgeous cover? The fabulous first chapter is here. Be sure to pre-order so you have it on January 26!

And Eloisa is already writing the next novel in the Desperate Duchesses By the Numbers series, Seven Minutes in Heaven! No publication date yet, but Eloisa has let it slip that her heroine is “sort of” a governess. She’s giving out hints in her newsletter every month, so be sure to join!

My American Duchess is Available for Pre-order

My American Duchess is now available for pre-order from Amazon and Barnes & Noble— and the gorgeous cover and first chapter are available right here!

While Eloisa was at the RWA conference, she was interviewed by All About Romance and she dished about My American Duchess: read the interview on AAR’s site.

Just before she left England, Eloisa picked up some fabulous prezzies for readers—but you have to be signed up for her monthly newsletter, Five Fabulous Things, to win. Join now!

My American Duchess Cover and Excerpt! 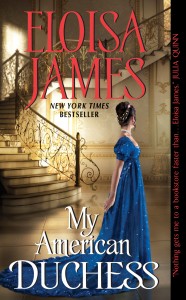 Today Bookish will feature additional art for My American Duchess, plus an essay penned by Eloisa about it.

Also, Eloisa has exciting news for those of you in the Milwaukee area. She will be the keynote speaker at the 2016 Barbara Vey Luncheon. Tickets go on sale at 1am EST, August 1. Last year the entire event was sold out by early morning so if you’d like to go, make sure to get your tickets fast. Team Eloisa will be sharing all of the details as they become available.

Eloisa is absolutely thrilled to announce a cover reveal for My American Duchess and the very first excerpt of the novel, right alongside some handy pre-order links!

Update on What’s Next From Eloisa

Team Eloisa is celebrating! Four Nights with the Duke has been named one of Amazon’s Best Books of 2015. Another hurrah: Four Nights now has over 200 Five Star reviews!

Updates on what’s next from Eloisa: My American Duchess will be released January 26, 2016. The Essex Sisters Companion Guide is slated for Summer 2016. Some online venders have inaccurate dates listed, but Eloisa’s site always has the most current, accurate information.